The event was emceed by well-known Pittsburgh public TV personality and Slovak-American, Rick Sebak. The national anthems of the Czech Republic, Slovakia, and the  U.S. were sung by local Czech and Slovak young people’s groups, and Bishop David  Zubik of the Diocese of Pittsburgh gave the invocation. Local officials, including Pittsburgh  Mayor William Peduto welcomed the attendees, and spoke of the influence that Czech and Slovak immigrants had on the social and economic development of Pittsburgh and the  United States. Honorary consuls (and FOS Chairman) Joseph Senko (Slovak) and Carol  Hochman (Czech) then introduced the guests from the Czech and Slovak governments.  The ambassadors of each country, Peter Kmec (Slovakia) and Hynek Kmonicek (Czech  Republic) then spoke, with Amb. Kmonicek noting that despite the ‘Velvet Divorce,’  Czechs and Slovaks can never be foreigners to each other. Government officials followed, with Miluse Horska, Vice President of the Senate of the Czech Parliament,  speaking about the significance of the Pittsburgh Agreement for the history of Czechoslovakia. Next,  Slovak government officials spoke: Katarina Csefalvayova, Chair of the Foreign Affairs  Committee of the National Council of the Slovak Republic, and Lukas Parizek, State Secretary of the Ministry of Foreign and European Affairs. Both echoed comments about  the significance of the Pittsburgh Agreement for the development of the Slovak nation. Ms.  Csefalvayova in particular, looked to the future and spoke of the need for continuing  vigilance in the face of current threats to democratic values. 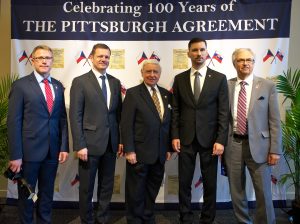 Closing the event was a wreath-laying ceremony at a display of plaques honoring Prof.  Masaryk and Pres. Woodrow Wilson that was shown by live video, and a benediction by  Bishop Zubik. The attendees then enjoyed interacting, while also viewing an exhibit of  panels entitled, “Czechs and Slovaks on Their Difficult Road to Peace and Independence.”

Earlier that same day a symposium, organized by American Friends of the Czech  Republic and co-sponsored with FOS, focusing on the historical background of the  Pittsburgh Agreement, was held at the University of Pittsburgh. Speakers included: Prof.  Milada Polisenska, of Anglo-American University, Prague; Mgr. Matej Hanula, Institute of  History of the Slovak Academy of Sciences, Bratislava; and Dr. Hugh L. Agnew of George  Washington University. Among the topics discussed were the roots of the “centralists vs.  autonomists” debate that involved Slovakia, and that eventually led to the Velvet Divorce in  1993.

Click here to view a video of the Pittsburgh Agreement symposium.

Click here to view more photos from the event. 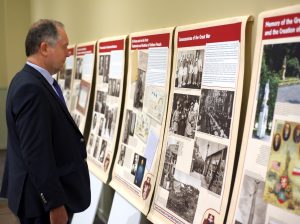 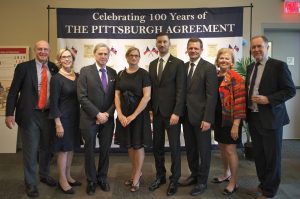 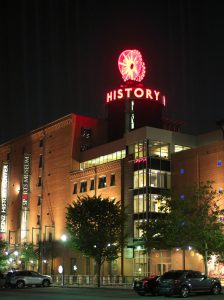