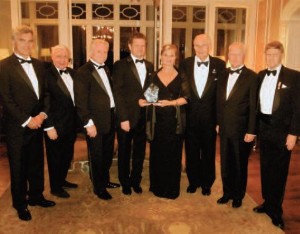 On Friday, June 14, Friends of Slovakia (FOS) hosted the fourth Slovak-American Awards Dinner at the Washington Golf & Country Club in Arlington, Virginia. The event was a black-tie gala celebration of the 20th anniversary of Slovak independence and friendly ties with the United States. The dinner was attended by approximately 110 guests, who enjoyed a pre-dinner reception on the outdoor patio overlooking the club’s golf course with a view of the National Cathedral in the background. The evening’s keynote speaker was Mr. George Babcoke, Senior Vice President-Europe and Global Operations Services for U.S. Steel Corporation. A few days prior to the dinner it was announced that Mr. Babcoke was returning to Slovakia to serve as President of US Steel Kosice, a position he held several years earlier. 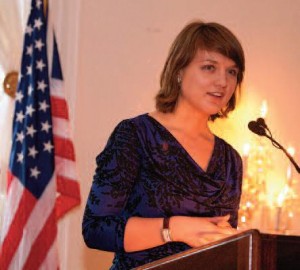 Slovak Ambassador Peter Kmec served as Honorary Chair of the dinner, Bill Tucker, Vice Chairman & President of FOS served as the Dinner Chairman, and Honorary Consul Ed Zelenak was the entertaining Master of Ceremonies. Also in attendance this year were the five 2013 Slovak scholarship recipients as this year’s dinner coincided with their stay in Washington, DC to attend one of the summer institutes sponsored by the Fund for American Studies.

As in previous years, a number of awards were presented during the evening to the following
worthy recipients:

• Two Business/Economic Awards were presented to Mr. Anton Zajac, President of ESET North America and to Mr. Milan Filo, President of Eco-Invest, a.s. Mr. Zajac is the founder of ESET, an award winning cyber security company and the most successful Slovak company in the U.S. Mr. Filo is the founder of Eco-Invest, a privately held Slovak investment and holding group, and a generous contributor to charitable organizations in Slovakia. Mr. Filo was unable to attend in person and the award was accepted on his behalf by Mr. Miroslav Vajs, Chairman of the Eco-Invest Board of Directors.

• The Slovak-American of the Year Award was presented to Mr. Andrew Rajec, President of the First Catholic Union of the USA and Canada. Mr. Rajec is a graduate of Marquette University Law School and has worked for national accounting CPA firms Price Waterhouse and Ernst & Young and has served as Senior Vice President and National Counsel for a national life insurance company. As president of FCSU, Mr. Rajec has expanded FSCU activities into 26 states and the organization has increased its assets by $116 million.

• The Education/Culture Award was presented to the Slovak-American Foundation (SAF). SAF’s mission is “to foster the relationship and strengthen the bonds between the US and the Slovak Republic by providing educational and exchange opportunities that will enrich the economic, social and political fabric, and help develop knowledge, skills, and abilities that will lead to prosperity.” Ms. Maria Hurajova, a member of the SAF Board of Directors, accepted the award on behalf of SAF.

A silent auction was held during the gala dinner, the proceeds of which will benefit the FOS Scholarship Fund and Amb. Peter Burian Roma Scholarship.