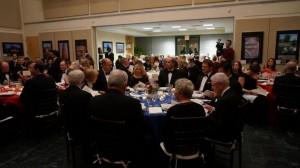 The sold-out event was a banner evening for FOS.  The embassy building and the spacious heated tent over the terrace made an elegant setting to display the silent auction items, tasting area for Double Cross Vodka and a festive, delicious dinner.   The event brought together more than 120 individuals along with corporate and fraternal representatives to celebrate Slovakia’s being a fully contributing member of the EU, NATO, and the transatlantic community of democracies. 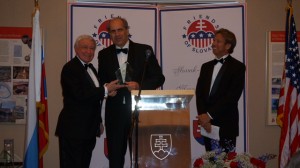 Joe Senko presents Amb. Burian with an award for diplomacy as Ed Zelenak looks on

Proceeds from this event support the FOS flagship Slovak Scholars’ Program, the annual Czech and Slovak Freedom Lecture and other programs promoting Slovak-American friendship.  Half the income from the silent auction supports the Slovak Honorary Consuls’ Peter Burian Roma Scholarship.

This year’s keynote speaker was Peter Burian, First Deputy Minister, Ministry of Foreign and European Affairs of the Slovak Republic and formerly Slovak Ambassador to Washington.  Minister Burian emphasized the economic, cultural and political ties binding the U.S. and Slovakia.

Those honored with awards were: 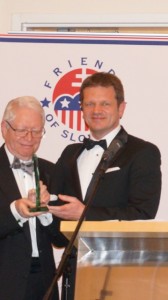 Dr. Vilcek is a true renaissance man: a scientist, an educator, an inventor and a philanthropist. Born and educated in Bratislava, he and his wife defected to the West in 1964 and came to New York City. He has been on the faculty of NYU School of Medicine since then. He not only did groundbreaking work on interferon but also developed methods for using it. His work led to treatments for a number of chronic diseases, including Crohn’s disease and rheumatoid arthritis. In 2000 the couple created the Vilcek Foundation that awards grants to immigrants making contributions in biomedical science and the arts; thanks to royalties from the drug he helped develop, Remicade, the Vilceks are major donors to NYU School of Medicine.

In his travels throughout the country Ambassador Tod Sedgwick has underscored the vital U.S. interest in supporting Slovakia’s success as a reliable trans-Atlantic partner in NATO and strong member of the     European Union. He has fostered U.S. – Slovak cultural and educational exchanges, including personal support for the FOS Slovak Scholars program. He has worked tirelessly and effectively to strengthen U.S.-Slovak commercial ties and to encourage Slovakia’s efforts to create a more effective judicial system and to fight corruption.  In recognition of his notable contributions to         building U.S.-Slovak friendship, Friends of Slovakia awarded Ambassador Sedgwick its Award for Diplomacy. 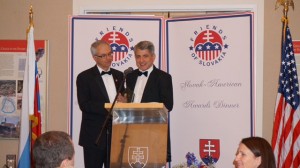 An internationally acclaimed musician – conductor, pianist, arranger, and composer – Peter Breiner studied music in Bratislava.  Among his many musical projects, he arranged all the national anthems of countries participating in the Olympic Games in Athens and in London. He is perhaps best known for his baroque arrangements of Christmas music and Beatles and Presley songs. He is currently working on a major piece based on Slovak dances. He has conducted many of the most prestigious orchestras and has recorded and released over 210 CDs. 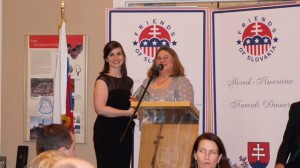 It is FOS’ partner for the FOS Summer Scholars Program.   TFAS and FOS, thanks to our generous donors, have provided over $200,000 for 30 FOS Slovak Scholars who participate in the eight-week summer academic and internship program at George Mason University.

This year’s dinner attracted a record number of benefactors who purchased full tables and a record number of program ads. FOS thanks to all who helped so generously to make this the most financially successful Slovak-American Awards Dinners held in the U.S. We are particularly grateful to Ambassador Peter Kmec and the Embassy staff for their hospitality and assistance with the event.

FOS SALUTES AND THANKS TO FOLLOWING SUPPORTERS: